Beads on Fabric: Observations from a Mad Costumer

(For clarity, that's "mad" as in "of questionable sanity" and not "mad" as in "upset", though I can tell you, making the transition from straight textile costuming to beads-on-fabric embellishment has its moments of ire.)

I began doing costumes for competition 15 years ago, but struggled to make the transition between Journeyman and Master, which required significant improvements in design, technique, and finishing. In the strange world of competitive costuming, needle-and-thread is king; judges tend to award the highest scores to costumes that are fabricated all or in part with hand-sewing techniques, especially if they're unusual, difficult, or time-consuming.

How does this relate to beading?  Seed beading (among costumers) is unusual, difficult, AND time-consuming. It also involves use of my beloved needle and thread, so I took to it very quickly and have been experimenting with ways to incorporate it into the detail work on larger pieces.

In competition costume, the work has to function at two levels: it has to withstand the scrutiny of the Workmanship judges (usually a panel of 3-5), who can poke and prod and examine as minutely as they and the contestant desire; it also has to be impressive, witty, strange, and/or engaging enough to play to a crowd of thousands on a proscenium stage 30-50 feet across in hopes of getting high marks from the Performance judges (a separate panel of 3-5). For me, the transition from Journeyman to Master began with seed-beading embellishments, in the form of bugle and 11/0s. I'd seen applique work, in which the pieces are assembled separately, and then flat-sewn onto fabric. However, I opted for a more integrated approach, in which the beads are sewn directly onto the fabric in the style of Native American beading, 3-5 beads at a time to make patterns and shapes. 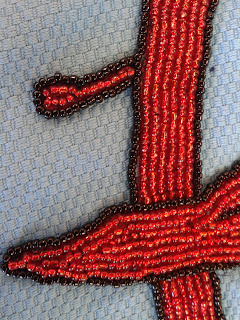 There were over 5000 seed beads in this pattern, and it took me about a month to complete. At first, I had the single red rows, but I wanted a more "comic book" look to the shape, so I added the outer black row, which has become my new standard for defining shapes and separating sections.

In 2012 came the Victorian Lady Doctor project, a 13-person costume entry with ladies in Victorian garb. Instead of the shapes and encrusting I'd done for previous wins, I used beads to emphasize seams, joints, and create patterns. 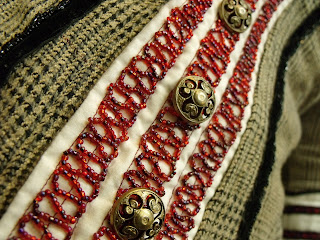 Detail of the center front panel of my gown. I used serpentine-shaped lines to emphasize the hourglass shape of the bodice. Note the double lines of black in hexes and round 11/0s along the edges of the black velvet ribbon. 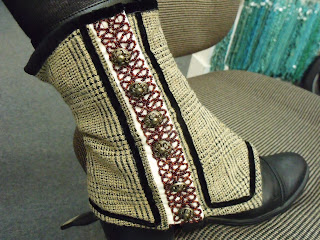 Matching spats. The beads here are 15/0s, smaller than the ones I used on the bodice so they'd be more proportional. This pair was created so I could hide the zippers on the boots, and also because I loved the novelty of having tweed spats. (An in-joke for the character, which is from a Science Fiction show.) 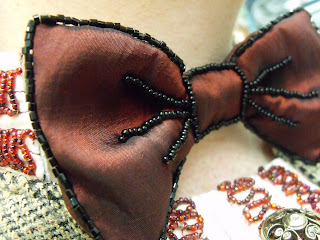 Here you can see the outlining detail of the bow tie. In addition to giving shape and definition to the piece, it stiffens the edges of the fabric, making the whole bow tie more effective, especially from a distance. A customer liked the effect so much that she commissioned a hair bow, using the same materials and technique.

As implied above, costuming with beads for me is not just for flat fabric or shapes, but becomes vital for accessorizing looks. For this year's major group project, one of my friends needed a celery stalk, the shape of which was EXTREMELY challenging. I ended up using 15/0s, 11/0s, and silk 11/0s, which are just slightly larger. 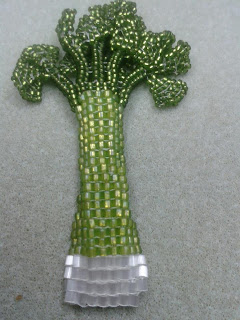 This is approximately life-sized. My friend attached a pin back to it and will be wearing it on her lapel. (Another in-joke for the character, which is also from a Science Fiction show.)


As a final example of the transformative power of beads for fabric pieces, I want to touch on my latest project, which is a Roman Centurion as reimagined through the sensibilities of Erte. (Think Roman + Great Gastby.) I started with raw bronze satin, looked up a mosaic pattern that dates back to Roman times, and was pleasantly surprised at how much the beads could alter the whole texture of the piece. I will be bringing the whole costume (of which the following is one piece) to competition this year to defend my Best in Show win from last year. 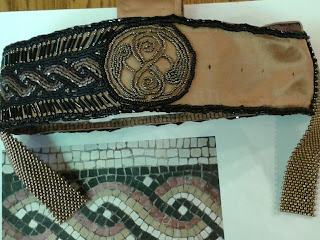 On the right, the raw satin. On the left, the embellished piece, which is sewn to exactly the same material. Below, the original mosaic design. The beaded mosaic is in 11/0 Delicas of matte black, iridescent rose, matte bronze, and hex bronze.

So what do I want you to take away from this blog post? Well, our organization is about promoting the use and love of beads of all kinds, so I've been teaching costumers basic bead embellishment, with good results in terms of competition wins, overall costume appearance and cohesion, and sales for our store. It's a niche market, yes, but one worth exploring. And for seed beaders, it gives a whole new sphere of useful applications for labors of love.

Starting this fall, I plan to add classes in bead embroidery to Ocean Sky Carlsbad's class list. I will also be applying to demonstrate/teach some basic methods for the 2014 Gaslight Gathering convention. Working among communities of costumers not only encourages me to bring my "A" game in terms of creativity, but has opened up new markets for my family's business.

For, as Polonius says in HAMLET, "Though this be madness, yet there is method in't."
Posted by Melinda Kimberly Layden at 2:50 PM No comments:

All of the stores from the association are starting to get entries for the "For the Love of Beads" contest that features amateur bead/jewelry designers from Southern California.

You still have time to get your submission in for the contest.

“Destinations” is the theme for this year’s challenge. Create an original piece of jewelry that is either strung, bead woven, or wire worked and displays your love of beads!

SCLBSA store owners in each region will be your judges.


Contest is open to all customers and is free to enter.
Employees and family members of local bead stores affiliated with the SCLBSA and professional and/or paid bead instructors are not eligible.

Contest Information
Entry Form
Posted by Svea K at 10:28 AM No comments:

Our Commitment
Our commitment is to the customers who shop the retail brick and mortar bead store. To have the Local Bead Store offer service, knowledge, variety, quality, and value of each shopping experience.